Here's a reality-check. What if communication and information connectivity had been initially invented and widespread by using only WIRELESS methods, and then someone announced invention of a NON-wireless way to do it with cords and cables so that every place indoors and outdoors didn't have to be constantly swamped by unnatural body-penetrating radiation (plus so that so much electricity wouldn't be wasted for at every moment continuously refilling all giant airspaces everywhere with radiation in case in one tiny area of airspace a machine would use that radiation)?
Everyone would be racing to have all commonly used products and services that are NON-wireless. And everyone would come up with more things and ways that are NON-wireless. And authorities would urge and educate, and probably even insist, that persons and places be NON-wireless. PLUS, there would be a societal opinion sort of like, "Shame on (1) anyone who continues to firsthand put wireless radiation into themselves, (2) anyone who spews or spills wireless into humans, other animals, and all plant life as secondhand exposures, and (3) anyone needlessly wasting electricity."
AND everyone would say shifting from wireless to NON-wireless is PROGRESS. And they'd be proud about it. People, companies, governments — they'd all be bragging about their progress. Because obviously it'd be progress to (1) not habitually penetrate unnatural, biologically-harmful radiation into your body, (2) not habitually waste electricity, and (3) not habitually spew radiation from your own wireless devices and hotspots into airspaces as secondhand radiation exposures penetrating into OTHER people's bodies and into pets, livestock, plants, all wildlife, etc.
RESPECT YOURSELF, OTHERS and ALL ENVIRONMENTS.
Wherever any type of wireless or electricity is available, also unnatural, body-penetrating, electromagnetic radiation is there.
Aim to reduce emissions and 1st-hand & 2nd-hand exposures.
• prefer corded connections with wireless capability turned off
• request non-wireless products and services
• provide corded devices, corded accessories
• reduce your EM radiation footprint
• respect wires
#PracticeSafeTech #BecauseYouCan
p.s. Yes, this post was written and posted by me while using only CORDED connections, CORDED devices, and CORDED accessories. If *you* haven't yet progressed to doing that, right now you can consider how to start your progress to non-wireless. I hope you congratulate yourself and other people for progressing to non-wireless and doing whatever it takes so that everyone can thrive in non-wireless environments.
p.p.s. Here is the Appeal issued by scientists who are experts on the body-penetrating radiation emitted wherever wireless or electricity are available. They sent their Appeal to the United Nations and the World Health Organization. How many experts? It's 225 scientists from 41 countries. [It started out as 190 scientists and the number grows as more scientists decide there is urgency to speak out about it.] Their dedicated website includes the Appeal in 18 languages, personal remarks from many of the scientists, some of the media coverage, and more. You could start at their Press Release: emfscientist.org/images/docs/EMF_Scientist_Press_Release_5-1-2015.pdf
Posted by Barbara Payne at 10:08 No comments:

PracticeSafeTech Seeds to Plant and Grow

I'd like to clarify some aspects about the radiation generated and emitted by invisibly connected devices such as cell phones (and not only cell phones, so please connect the dots even though I'm mostly explaining by using the example of a cell phone).

A cell phone that is on vibrate continues to generate and emit the type of body-penetrating biologically-active electromagnetic radiation called "radiofrequency" (RF) or "microwave" (MW). The ONLY thing that changes when a phone is set to vibrate is that usual sounds for incoming calls, messages, and other alerts are replaced by the vibration movement and often there is an accompanying low buzz sound.

Many people don't realize that even when a cell phone is not directly in use, during all the time the phone is waiting for whenever the next call, message, vibration, or other notification will arrive, the phone is pumping radiation into all children, adults, pets, plants, etc.

A waiting cell phone (that is not in airplane mode) continues to pump its RF/MW radiation into the environment because if the phone didn't do that, the network wouldn't know which coverage flood of network equipment RF/MW radiation (from towers and other antenna installations or hotspots) to use to carry a new call, message, etc. to the vicinity of that phone.

Also, a cell phone that *is* in airplane mode but not powered off continues to emit other types of body-penetrating electromagnetic radiation. And although I don't know for sure, I'm pretty sure that a phone that is on vibrate emits much stronger intensities of at least one of these other types of body-penetrating radiation; phones on vibrate actually *move*... think about it... how much energy is involved to cause a machine (that isn't visibly attached to anything and is not light as a feather) to make all those violent jerking movements, repetitively, whenever a vibration alert happens.

Also, the body of every baby, child, adult, pet, wildlife, plant located where there is a network coverage flood is 24/7 swamped and penetrated by that network radiation -- whether or not the human, other animal, or plant ever carries, uses, or owns a cell phone or other "wireless" device (including wearables, trackers, baby and other monitors, sensors, etc.). It could be said that each individual network subscriber and device user unknowingly (or knowingly!) pays for the "right" to irradiate all children, adults, animals, plants, etc. [p.s. Now *you* know.]

PracticeSafeTech seeds to plant and grow include...

Posted by Barbara Payne at 11:49 No comments:

BE A TREND-SETTER... for today and all tomorrows

Health, child, and consumer advocates urge attention to personal and public health, hygiene, and well-being in regard to minimizing firsthand and secondhand electromagnetic radiation exposures caused by the emissions from screen and other equipment and devices.

Those emissions penetrate into and biologically affect humans, other animals, and plants.

Those advocates also urge a reality-check: make the choice to immediately start a new trend of wanting to *decrease* both exposures and emissions of electrosmog radiation (instead of the present trend to purposely everywhere increase this pollution and exposures).

Instantly, at this very moment, easy habit preferences of individuals and systems can significantly reduce, or eliminate, these radiation emissions in indoor and outdoor environments—usually at zero cost, requiring only awareness and kindness.

Truly progressive, thoughtful policies and innovation can quickly and significantly address this present flaw in communication, power, and technology products, services, and systems, and can aim to now and always prevent related pollution and health impairments in all populations.

Some suggestions if you want to be even more aware and kind to yourself and others:

Electromagnetic-Sensitivity (ES) is a condition in which adults and children develop intolerance to radiation from wireless technology devices and infrastructure such as cell phones, Wi-Fi, wireless utility “smart”meters and cell towers and antennas. Once they develop the condition, they experience various symptoms from tingling in the hands and pain in the head when using a cell phone to severe and disabling illness. The most common symptoms are headaches, sleep disturbances, nausea, dizziness, cognitive and memory problems, a racing heart and heart palpitations, burning sensations, nose bleeds and noise or light sensitivities. Recent research suggests that these symptoms indicate severe physiological harm including breakage of the Blood Brain Barrier, damage to the limbic system and the thalamus, oxidative stress, autoimmune damage and neurodegeneration. The prevalence of the condition is growing rapidly, including amongst children. Surveys from a decade ago suggest that 10% of the population already suffers from symptoms. However, this rate is likely understated considering many people who experience symptoms are not aware that their symptoms are caused by wireless devices and in addition, given the exponential increase in the past decade of the use of wireless devices including Wi-Fi and smartphones and increase in the levels of radiation in the environment from the wireless infrastructure, it is likely that the rates of people who suffer from the condition are higher and will continue to rise. While other conditions have been associated with exposure to radiation from wireless technology, such as brain & breast cancer, fertility problems, autism and ADD, it seems that the most widespread manifestation of harm from this technology is ES.


Take One Step at a Time.
It is simpler than it may seem.
From Environmental Health Trust website
https://ehtrust.org/take-action/educate-yourself/ten-steps-to-safe-tech/
Please take the time to become wise about safer use of wireless transmitting devices (WTDs) such as smart phones, home cordless phones, tablets, laptops, gaming devices, and desktop computers. Be informed on these Ten Steps To Safe Technology so you can make wiser choices in technology use.

A Wellness Guide For The Digital Age
https://www.safertechsolutions.org/book/

Overpowered
The Dangers of Electromagnetic Radiation (EMF)
and What You Can Do about It
By Martin Blank, PhD
Category: Health & Fitness | Science
At publisher Penguin Random House website
http://www.penguinrandomhouse.com/books/226324/overpowered-by-martin-blank-phd/9781609806200/ 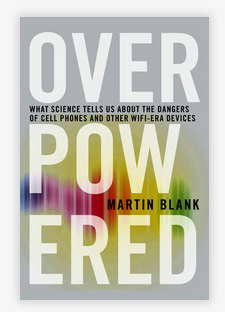 Keys, wallet, cell phone . . . ready to go! Cell phones have become ubiquitous fixtures of twenty-first-century life—suctioned to our ears and stuck in our pockets. Yet, we’ve all heard whispers that these essential little devices give you brain cancer. Many of us are left wondering, as Maureen Dowd recently asked in the New York Times, “Are cells the new cigarettes?”

Overpowered brings readers, in accessible and fascinating prose, through the science, indicating biological effects resulting from low, non-thermal levels of non-ionizing electromagnetic radiation (levels considered safe by regulatory agencies), coming not only from cell phones, but many other devices we use in our homes and offices every day.

Dr. Blank arms us with the information we need to lobby government and industry to keep ourselves and our families safe.

“This book is a must for anyone concerned with protecting their well-being, that of loved ones, and other species. From the personal, the political, and the planetary, you will never see things the same way again.”—B. Blake Levitt, former New York Times contributor and author of Electromagnetic Fields, A Consumer’s Guide to the Issues and How to Protect Ourselves

“The extremely well documented Overpowered reads like an environmental thriller! Dr. Blank does a superb job of explaining the biological effects of cellphones and all things wireless on cell physiology and how to protect ourselves and, most importantly, our children. The sections on electricity, wildlife, and  the ‘business’ of science all demonstrate the dark side of technology–an inconvenient truth we must consider.”—Ann Louise Gittleman, Ph.D.

“Martin Blank deals with a difficult subject in a scientifically accurate but easily readable fashion. He covers everything from powerlines, to cell phones, to light bulbs, to conflicts of interest, with humor and passion. In this great scientist, we have an unlikely activist and truth teller.”—David O. Carpenter, M.D., Director, Institute for Health and the Environment, University at Albany

Posted by Barbara Payne at 12:13 No comments: