This is an image of a two-sided postcard. If you click anywhere on the image, it will let you choose to look at the front or the back of the postcard at a bigger size. 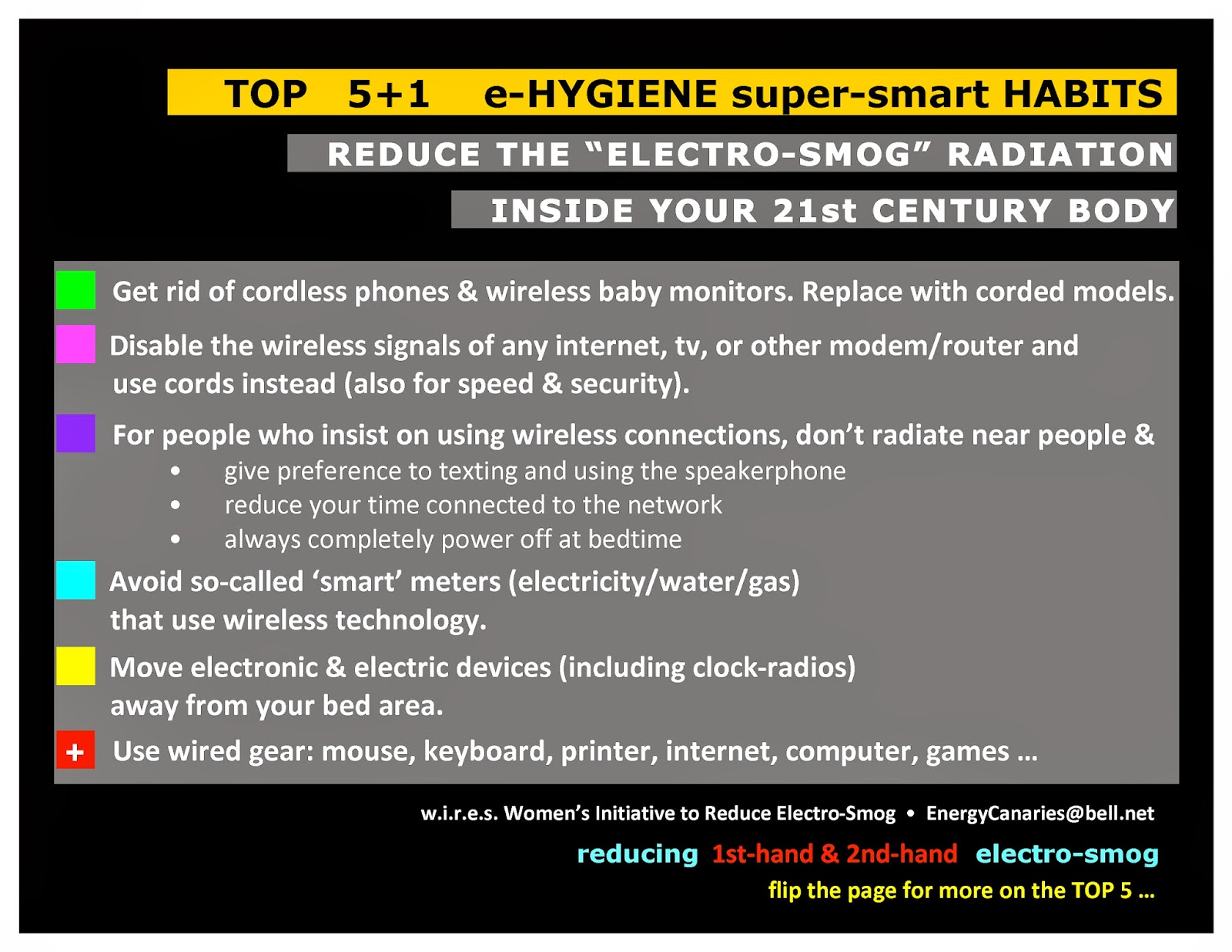 Posted by Barbara Payne at 13:06 No comments:

Not solely regarding the electro-smog pollution topic (i.e., all body/water/air/food/earth pollution problems), I think it's important to get out of our habits of using phrases that include words implying that if people don't smarten up then IN THE FUTURE bad things will result. Because it's NOW that the bad things are happening: the pollution IS the "bad thing." Whether or not there are latency periods until "more bad things" become individually or publicly noticeable/detectible, whether or not there are "enough" cumulative or acute exposures to be individually or synergistically identified as problematic, the over-exposures ("bad things") are happening TODAY, NOW, at this moment.

To me, regarding all pollution topics, this is the crux of why (most? many?) people do nothing with the knowledge. Why should they do anything when everyone is saying that there's gonna be a problem in the future if there are no changes made—as if there is no problem right now!! It's that pollution right now must be reduced/eliminated. Certainly all my colleagues (and other public and expert persons urging attention to environment/pollution), and certainly me too, all of us often fall into that future-doom habit. Maybe it's because we aren't dropping dead as we're standing there talking to someone about it. Sure we aren't dropping dead at this moment but actually we are dropping; collectively, we have already been pushed off the cliff. It's merely that we haven't hit bottom (yet) and don't know where bottom is. And gee, in the meantime most/many people are experiencing this risky free-fall as something that feels okay-ish, and even can be a rush, and even for many people seems like mostly fun and goodtimes!

Would we prefer to right now be back on solid ground and having just as much fun and goodtimes there? Yes, I think so. So why do we talk as if now doesn't matter? I think when we talk like that we're doing a giant disservice and disrespecting all those who came before us—people like Rachel Carson and innumerable other people. In fact, I think that "future bad" style of language is, in a way, spreading disrespect and confusion like a virus, which is the opposite of what we hope and intend.

It isn't that today's baby or child (or anyone) in 2 or 5 or 10 years from now would be a poster-child for a resultant illness or catastrophe. It's the face of each and every baby and child you see right now, today, who already are right now the poster-children because they already have been exposed and harmed and continue right now to be exposed and harmed (whether or not their suffering is "enough" to notice).

Maybe it's sort of like when humans became able to look down from space at a view of Earth they hadn't previously seen. Some observers claim this visual shoved environment/ecology thoughts more into public prominence. It wasn't that everyone had to see a smoggy, filthy, polluted, sick, nasty-looking planet in order to react. They saw this wondrous, big, mostly blue ball and instinctively wanted to do whatever it takes to help it.

I'm not a parent, however, I'm pretty sure parents care about their kids' thriving right now. So why does anyone talk about a now-problem in words that imply it doesn't exist but yes indeedy it's for sure going to be an uh-oh at some mystery time in their kids' future? Non-reaction to that doesn't surprise me. I think everyone must stop inadvertently implying that there is presently no problem.

And I'm pretty sure that most of us are not in this for the purpose of being able to say, years from now, "Dr. Havas was right, Dr. Davis was right, whoever else was right...." It's the opposite: we want to NOT have to say that. How's it working out for us with those buttons that say, "Rachel Carson was right"?
Posted by Barbara Payne at 16:10 No comments:

This collection was handed out at the annual Total Health Show April 4-6, 2014 in Toronto, Canada. My apologies if the links are not all clickable (I will attempt to fix any that are not, but you may have to copy-paste into your internet browser). If you would like a print copy of the file (it prints nicely on a single sheet double-sided), please ask me for it via email to energycanaries@gmail.com.


see below for RECOMMENDED BOOKS

WiFi in Schools: The Facts (18 min)  Around the world an increasing number of governments and authorities have banned or warned against the use of wifi in schools. Many experts, scientists and doctors are warning the public to take a precautionary approach.
http://www.youtube.com/watch?v=kmcAXZ-o1K4&feature=share&list=FLI_8xq3QcBTrnb4665kpsNA

Dr. Anthony Miller to Toronto City Council: RF Exposure (4 min)  Dr. Miller is at University of Toronto's Dalla Lana School of Public Health. He presents to Council that RF exposure should be classified as a 2A (probable carcinogen), not a 2B (possible carcinogen).
http://www.youtube.com/watch?v=wARxnaxrRKk

Strong evidence for hazards of RF in brain cancer (2 min)
David Carpenter, MD: "A whole generation may be very much at risk."
http://vimeo.com/73806191

Dr. Magda Havas: WiFi in Schools is Safe. True or False? (24 min)
Learn about studies that have documented adverse effects of this radiation on rats, blood cells, the heart, cancer; learn about alternatives to wireless routers that are cost effective, energy efficient, and don't emit microwave radiation.
https://www.youtube.com/watch?v=6v75sKAUFdc

Resonance – Beings of Frequency (1 hr 28 min)  A sensational eye-opening documentary reveals the harm we are doing by existing in an ocean of manmade wireless frequencies.
http://vimeo.com/54189727

Take Back Your Power (1 hr 41 min) Whistleblowers, researchers, environmentalists, doctors, and others take us on a journey to expose erosion of rights in the name of “smart” and “green.”
http://www.takebackyourpower.net/

Dirty Electricity: Electrification and the Diseases of Civilization
by Sam Milham

Public Health SOS: The Shadow Side of the Wireless Revolution
by Camilla Rees and Magda Havas

A Wellness Guide for The Digital Age
by Kerry Crofton

Disconnect: The Truth About Cell Phone Radiation
by Devra Davis

#lightwebdarkweb: Three Reasons to Reform Social Media Be4 It Re-Forms Us
by Raffi Cavoukian @Raffi_RC

The Body Electric
by Robert O. Becker and Gary Selden

Posted by Barbara Payne at 17:17 No comments: