Mobile phones in airplane mode AND even mobile phones that are not subscribed to any service plan have plenty of features that work without any wireless signal. When users turn off the wireless signals, 1st-hand and 2-hand radiation exposure is reduced, plus batteries don't drain as quickly.

In media reports about mobile phone users who try to go cold turkey without their phones, often included is the experimenter's complaints about not having a contact list or an alarm clock without their mobile phone.

For people who remain users yet want to reduce their own and other people's exposure to wireless radiation, in airplane mode (or whatever signals off) plenty of non-wireless features still work:

I still occasionally use my old mobile phone as a camera—I transfer the photos to computer via the cable that came with the phone. I keep the phone away from my body because distance is good also because of the electromagnetic emissions from the battery power.

IMPORTANT NOTE:
Any mobile phone with NO PLAN (in other words: FREE) can be used for all of the above PLUS to phone 911 in an emergency.

During the past week, I checked with Toronto Police Headquarters (twice, to make sure) about the no-plan 911 point above, as I always assumed it was probably an urban myth. The Police told me with certainty that it isn’t a myth, that indeed any mobile phone INCLUDING a mobile phone that does NOT subscribe to any plan or service can be used to phone 911. Obviously, there must be charge in the battery and/or the phone connected to a power source (e.g., plugged into the car). Any mobile phone can be used to phone 911 regardless whether or not the phone is subscribed to any network service. As with ALL cell phone 911 calls, responders can’t locate you as quickly nor as precisely as they can with a landline 911 call, so if you call 911 from a mobile phone please right away tell them your location.
Posted by Barbara Payne at 11:05 2 comments:

Sorry, I don't know details about the segment or when during the hour it will happen. If you visit the website in advance, you can find out the cable/satellite channel that carries the show "The Big Picture" in your area.

Here is the posting at facebook (it isn't clickable here, only a screenshot): 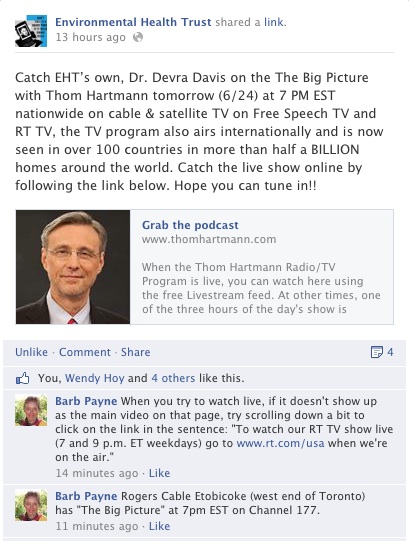 Posted by Barbara Payne at 20:18 No comments:

WIRELESS COMMUNICATION SIGNALS ARE NOT MAGICAL

According to an antenna industry blog:


“Perhaps it's because RF and antennas seem to the uninitiated what Einstein called ‘spukhafte Fernwirkung’ or ‘spooky action at a distance’.  You can't see it, but it works.  As one antenna guy put it, ‘If RF was visible, we'd be out of business.’

You’re sitting inside the centre of an indoor shopping plaza with your smartphone on and you decide to use it for a live real-time phone call.

The network antenna that is sending you the zillions of bits-and-bytes of data that represent every sound that person is continuously making (even their breathing sounds) is 200 metres away somewhere high up on top of a 25-storey high-rise building. Yet, amazingly that person’s sounds are continuously delivered to you, usually perfectly, and always in an instant; plus the zillions of bits-and-bytes representing your voice and breathing are also continuously delivered by your phone to that distant network antenna.

Amazing right? The person could be 2,000 kilometres away in a different country, plus some network antennas are farther away than 200 metres from your phone. And even if you leave the plaza and move around quickly in a vehicle, those two continuously changing and refilling swamps of bits-and-bytes that represent both your live voices are available everywhere you go, continuously, in an instant, every instant, and perfectly.

Do you really think it’s something WEAK that has zillions of components yet can in an instant hurtle over large distances invisibly through air, wind, rain, concrete, thick glass, roofs, walls, buildings, trees, vehicles and live bodies that are between your phone and the network antenna to slam into your mobile device completely intact?

Maybe you decided to text not phone. Maybe the person responds by text immediately and you have a lively text message conversation that is definitely perfect and each message delivered in an instant. Maybe that’s fewer zillions of bits-and-bytes slamming through everything.

Maybe it isn’t interaction with a person. Maybe you want to stream a video or live tv on your phone or tablet or laptop. Zillions more swamps of zillions of bits-and-bytes that represent constantly changing visuals and audio are now hurtling through the air, slamming through anything living, through anything solid, to arrive at your device, again, perfectly intact at each and every moment no matter how long you watch.

Wireless communication seems invisible and amazing, but it doesn’t happen by magic. The not-natural electromagnetic energy (EE) that networks and devices must generate and emit in order to digitize, carry, announce, and deliver those swamps of zillions of bits-and-bytes is not weak. And science tells us that for sure this not-natural energy quite easily penetrates into the inside of everyone’s body. It doesn’t matter whether or not you or anyone else in a network coverage area is using a networked device—if there’s coverage where you are, the not-natural EE is there with you and in you.

Not-natural EE touching you or inside your body can be a problem. The zillions of bits of information that your brain and body continuously exchange in order to decide what the cells of your body should do at each moment to keep you alive, functioning, and thinking also rely on a communication network—the natural one you’re born with that develops and changes as you grow and live.

If you want wireline services and products to be different or capable of more, then speak up and tell manufacturers and authorities what you want. Hmm, that might be better than them telling you what you want. If I can think of several ways to make wireline communications and connection ports even handier and more available, obviously R&D wizards can come up with a lot more ways—if we ask. If you insist, they’ll come up with wireline solutions that can fulfill any need or desire.

Because there are so many wireless networks and wireless electronic devices now, not-natural EE emissions are first-hand and second-hand exposures for everyone everywhere. It’s becoming more important to tell authorities that we want these emissions and exposures reduced, not increased, and that wireline communication methods must always be available—for everyone—for everyday, occasional, and emergency purposes.

At the very least, if you have WiFi internet at home, at bedtime completely power off any router and all WiFi-enabled devices—until you learn more.

Now you know. Pay it forward.

Sent from my iPhone - a cancer-causing device! Practice Safer celling. Text or email instead! Or just break free. Your brain and body will thank you.

That's the new automatic email signature a lawyer just started using on his cell phone. He received several responses about it very soon after he started using it.

Most people know that I'd rather everyone chooses modern wired communication methods. However, it’s silly that most people who do use a cell phone stick with the account’s default auto-signature when instead—and effortlessly—a personal, business, or fun message could automatically be there. The default auto-signature is boring and totally useless—unless it's that the user feels obligated to pay for a service that provides free advertising to the phone manufacturer and/or network provider.
Posted by Barbara Payne at 09:43 No comments: